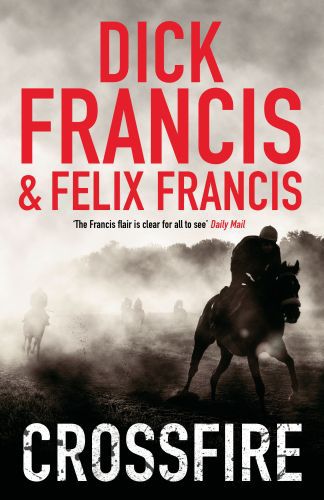 Crossfire is the new thriller from father son team Dick Francis and Felix Francis.
Captain Thomas Forsyth's tour of Afghanistan is cut brutally short when he is badly wounded by a roadside bomb. Returning home, to his mother - a racehorse trainer and the 'First Lady' of racing - Tom discovers the training business is on the edge, and facing a threat far more dangerous than a run of bad form. Tom finds himself on a very different, but just as deadly, battlefield where his military skills are tested . . . kill or be killed?From Felix Francis and Dick Francis, the bestselling co-authors of Dead Heat and Even Money comes Crossfire, the latest Dick Francis novel. Packed with all the hair-raising suspense and excitement readers know and love from Dick Francis, Crossfire is the most dazzling yet. Praise for the Dick Francis novels:
'The Francis flair is clear for all to see' Daily Mail
'Spare, efficient and unflashy . . . inexorably draws you in' Daily Telegraph
'The master of suspense and intrigue' Country Life
'Still the master' Racing Post
Dick Francis was one of the most successful post-war National Hunt jockeys. On his retirement from the saddle, he published his autobiography, The Sport of Queens, before going on to write forty-three bestselling novels, a volume of short stories and the biography of Lester Piggott. Dick Francis died in February, 2010, at the age of 89, but he remains one of the greatest thriller writers of all time.Felix Francis is the younger of Dick's two sons. Since 2006, Felix has taken a more significant role in the writing, first with Dead Heat and then increasingly with the bestsellers, Silks and Even Money. Crossfire is the fourth novel of this father-and-son collaboration.