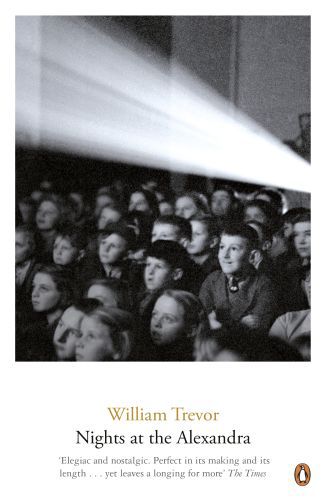 Nights at the Alexandra

Nights at the Alexandra by William Trevor - a classic early novel by one of the world's greatest writersA brief encounter in wartime Ireland - the memory of which lasts a lifetime
In a small town in Ireland middle-aged Harry looks back on his wartime adolescence when he fetched and carried for the beautiful young Englishwoman who had taken over the big stone house with her much older German husband. But Frau Messinger's health is failing, and her husband decides to build a cinema in the town to honour her. Harry will work in it; one day he will own it; and he will always remain captive to the memory of the beguiling young woman who arrived suddenly from abroad and lit up his drab provincial life.
William Trevor's gift of understanding the poignancy in apparently small lives is beautifully realized in this short novel.'Perfect in its making and its length' The Times'Certainly lingers in the mind. I am prepared to bet that I will still remember it in a year's time, which is a test of genuine excellence' Harriet Waugh, SpectatorWilliam Trevor was born in Ireland in 1928 and educated at Trinity College, Dublin. He is regarded as one of the greatest short story writers in English, and has also written many award-winning novels, most recently The Story of Lucy Gault and Love and Summer. For many years he has lived in Devon.