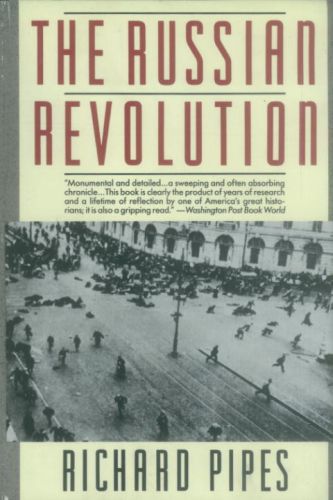 Mr. Pipes writes trenchantly, and at times superbly....No single volume known to me even begins to cater so adequately to those who want to discover what really happened to Russia....Nor do I know any other book better designed to help Soviet citizens to struggle out of the darkness."
-- Ronald Hingley, The New York Times Book Review
Ground-breaking in its inclusiveness, enthralling in its narrative of a movement whose purpose, in the words of Leon Trotsky, was "to overthrow the world," The Russian Revolution draws conclusions that have already aroused great controversy in this country-and that are certain to be explosive when the book is published in the Soviet Union. Richard Pipes argues convincingly that the Russian Revolution was an intellectual, rather than a class, uprising; that it was steeped in terror from its very outset; and that it was not a revolution at all but a coup d'etat -- "the capture of governmental power by a small minority."
From the Trade Paperback edition.