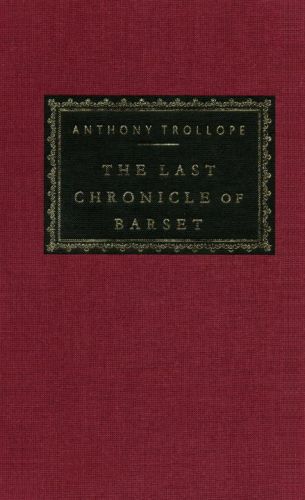 The Last Chronicle of Barset

(Book Jacket Status: Not Jacketed)
The Last Chronicle of Barset (1867) is the novel that Anthony Trollope considered his masterpiece.
In the course of the last century and a half, Trollope’s county of Barset has become one of English literature’s most celebrated fictional landscapes. This sixth and final novel in the Barsetshire series revolves around the proud, hardworking, and impecunious Reverend Josiah Crawley, curate of the poor parish of Hogglestock, and his brush with disaster. Crawley stands accused of a theft, but, as he is uncertain himself as to the truth of the matter, he is unable to offer a defense and retreats into self-doubt and shame. The community is bitterly divided between those who wish to help him and those convinced of his guilt, the latter headed by Mrs. Proudie, the bishop’s forceful wife. Meanwhile, Crawley’s daughter Grace has captured the affection of Archdeacon Grantly’s son, Henry, but her father’s scandal stands in the way of their marriage. The solution to the mystery, the downfall of Mrs. Proudie, and the resolution of the fates of many other beloved characters, including Septimus Harding, Johnny Eames, and Lily Dale, bring the famous Barsetshire chronicles to a splendid conclusion. The Last Chronicle of Barset provides a brilliant example of Trollope’s ability to render a highly individual society with such detail and force that it comes to reflect every society, in any age.