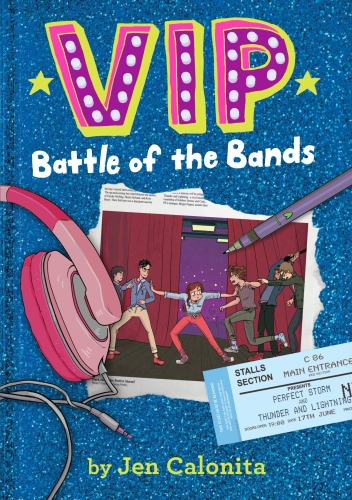 VIP: Battle of the Bands

Mackenzie "Mac" Lowell is living a dream come true on tour with her favorite boy band. Spending time on the road with Perfect Storm hasn't been what Mac expected, though-it's even BETTER! But with screaming fans and big-time recording sessions come haters and copycats, like Thunder and Lightning, a new band on the label whose first single sounds suspiciously like the song Perfect Storm's guitarist wrote for Mac. As the two bands set out on a joint summer tour, more and more of Perfect Storm's secrets are leaked to the public. Where's the one place all these lyrics and secrets are supposedly being kept safe? In Mac's journal, of course! Can Mac-and her comic-book alter ego, Mac Attack-stop the leaks and nab the culprit? With black-and-white illustrations and action-packed Mac Attack comics throughout, Jen Calonita's VIP series is more exciting than a backstage pass!