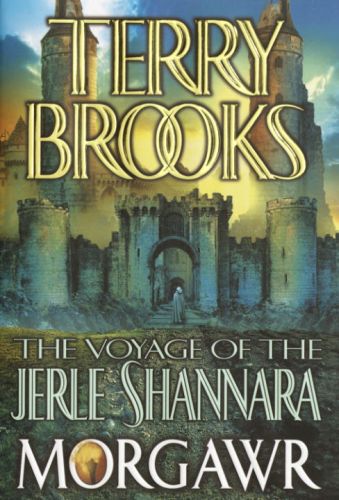 The Voyage of the Jerle Shannara: Morgawr

BONUS: This edition contains an excerpt from Terry Brooks's The Measure of the Magic.
New York Times bestselling author Terry Brooks became the master of epic fantasy with the publication of his legendary debut, The Sword of Shannara. Since then, each new novel in the Shannara saga has brilliantly built upon and deepened the world of breathtaking magic, adventure, and intrigue he created. In The Voyage of the Jerle Shannara--his third enchanting series--he literally took his legions of loyal readers soaring to new heights as a colorful contingent of characters took to the skies aboard a magnificent airship on a quest fraught with wonder and danger.
Now in Morgawr, the quest at last draws to its climactic conclusion, as the forces of good and evil vying against each other to possess an ancient magic race towards an explosive clash--and whatever fate awaits the victor . . . and the vanquished. Harrowing confrontations with the merciless Ilse Witch and the monstrous Antrax have already taken their toll on the intrepid heroes of the Four Lands. But their darkest adversary now snaps at their heels, in the form of the Morgawr--master of the Ilse Witch, feeder upon the souls of his enemies, and centuries-old sorcerer of unimaginable might.
With a fleet of airships and a crew of walking dead men at his command, the Morgawr is in relentless pursuit of the Jerle Shannara and the crew that mansher. For the Morgawr, the goal is two fold: to find and control the fabled ancient books of magic, and to destroy the dark disciple who betrayed him--the Ilse Witch. But the Ilse Witch is already a prisoner . . . of herself. Exposed to the awesome power of the Sword of Shannara, and forced to confront the truth of her horrifying deeds, she has fled deep into her own mind. Now at the mercy of those who seek vengeance against her, her only protector is her long-lost brother, Bek Ohmsford, who is determined to redeem his beloved sister . . . and deliver her to the destiny predicted for her by the Druid Walker Boh.
Once again, Terry Brooks weaves together high adventure, vividly wrought characters, and a spellbinding world into an irresistible story of heroism and sacrifice, love and honor. In Morgawr, fans of the Shannara mythos will find both a satisfying finale and the promise of new wonders yet to come.