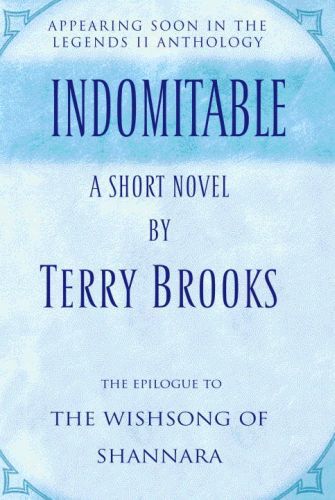 BONUS: This edition contains an excerpt from Terry Brooks's The Measure of the Magic.
The time of the Shannara follows in the wake of an apocalypse that has destroyed the old world and very nearly annihilated its people as well. A thousand years of savagery and barbarism have concluded at the start the series with the emergence of a new civilization in which magic has replaced science as the dominant source of power. A Druid Council comprised of the most talented of the new racesMen, Dwarves, Trolls, Gnomes, and Elves, names taken from the old legendshas begun the arduous task of rebuilding the world and putting an end to the racial warfare that has consumed the survivors of the so-called Great Wars since their conclusion.
But the wars continue, albeit in a different form. Magic, like science, is often mercurial, can be used for good or evil, and can have a positive or negative effect on those who come in contact with it. In The Sword of Shannara, a Druid subverted by his craving for magic s power manipulated Trolls and Gnomes in his effort to gain mastery over the other races. He failed because of Shea Ohmsford, the last of an Elven family with the Shannara surname. Shea, with the help of his brother and a small band of companions, was able to wield the fabled Sword of Shannara to destroy the Dark Lord.
Subsequently, in the Elfstones of the Shannara, his grandson Wil was faced with another sort of challenge, one that required the use of a magic contained in a set of Elfstones. But use of the Stones altered Wils genetic makeup, so that his own children were born with magic in their blood. As a result, in the third book of the series, the Wishsong of Shannara, Brin and her brother Jair were recruited by the Druid Allanon to seek out and destroy the Ildatch, the book of dark magic that had subverted the Warlock Lord, and was now doing the same with the Mord wraiths.
The story that follows takes place several years after the conclusion of The Wishsong and again features Jair Ohmsford, who must come to terms with his obsession with the past and his use of his magic that his sister has warned him not to trust Indomitable by Terry Brooks, appearing soon in the Legends II anthology.
TERRY BROOKS adds an exciting epilogue to The Wishsong of Shannara in Indomitable, the tale of Jair Ohmsfords desperate quest to complete the destruction of the evil Ildatch . . . armed only with the magic of illusion.
PRAISE FOR TERRY BROOKS Ilse Witch If Harry [Potter] has given you a thirst for fantasy and you have not discovered the magic of terry brooks, you are in for a treat. . . . The Voyage of the Jerle Shannara should help fill the void Harry Potter fans feel in the pits of their stomachs, and they might even find themselves waiting for the next Shannara novel with the same thirst they have for Harry.
Rocky Mountain News This latest volume finds Mr. Brooks power ascending . . . The action and creatures come fast and furious.
The Dallas Morning News If you were delighted and entranced by Michael Endes The Never Ending Story, you will definitely want to sample one or more of Terry Brookss books.
Santa Cruz Sentinel This lively new adventure, set a generation later, combines the familiar quest format used in The Sword of Shannara with an array of well-defined characters and malevolent beings. . . . Fans familiar with the Shannara series, and new readers as well, will enjoy this first Shannara tale in four years.
Publishers Weekly