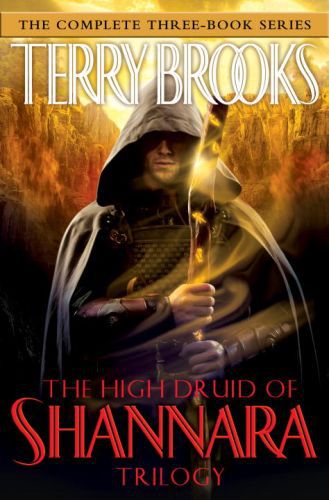 The High Druid of Shannara Trilogy

The complete three-book series In one handsome collectors edition hardcover, here are all three novels that comprise Terry Brookss bestselling High Druid of Shannara trilogy--Jarka Ruus, Tanequil, and Straken. These thrilling novels demonstrate this acclaimed authors magic of invention and mastery of storytelling.
Twenty years have passed since Grianne Ohmsford denounced her former life as the dreaded Ilse Witch. Fulfilling the destiny predicted for her, she has established the Third Druid Council and dedicated herself to its goals of peace and defense of the Four Lands. But the intrigue, treachery, and sinister deeds that have haunted Druid history for generations continue to thrive. And despite her devotion to the greater good as Ard Rhys, the High Druid of Paranor, Grianne still has bitter enemies who will stop at nothing to see her deposed--or destroyed.
As wicked plots are hatched, the Ard Rhys suddenly disappears in the dead of night and without a trace. Now, barely a step ahead of the malevolent forces at work, Griannes brave nephew, Pen Ohmsford, embarks on a dangerous mission to find and deliver the High Druid of Shannara from wherever she may be held.
With no shortage of adventure, exhilaration, suspense, and enchantment, the High Druid of Shannara trilogy proves why Terry Brooks is one of the most beloved fantasy authors of all time.
From the Hardcover edition.