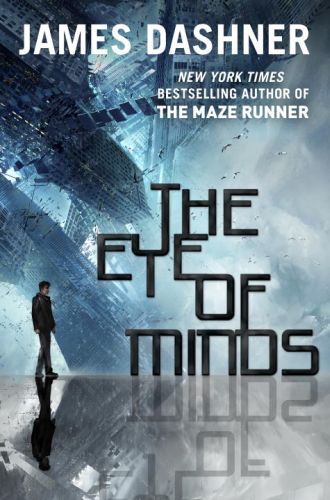 The Eye of Minds (The Mortality Doctrine, Book One)

From James Dashner, the author of the #1 New York Times bestselling Maze Runner series, which includes The Maze Runner--now a #1 movie worldwide--and The Scorch Trials--soon to be a major motion picture from Twentieth Century Fox that hits theaters on September 18, 2015--comes an all-new, edge-of-your seat adventure. The Eye of Minds is the first novel in the Mortality Doctrine series set in a world of hyperadvanced technology, cyberterrorists, and gaming beyond your wildest dreams . . . and your worst nightmares.
Michael is a gamer. And like most gamers, he almost spends more time on the VirtNet than in the actual world. The VirtNet offers total mind and body immersion, and it’s addictive. Thanks to technology, anyone with enough money can experience fantasy worlds, risk their life without the chance of death, or just hang around with Virt-friends. And the more hacking skills you have, the more fun. Why bother following the rules when most of them are dumb, anyway?
But some rules were made for a reason. Some technology is too dangerous to fool with. And recent reports claim that one gamer is going beyond what any gamer has done before: he’s holding players hostage inside the VirtNet. The effects are horrific--the hostages have all been declared brain-dead. Yet the gamer’s motives are a mystery.
The government knows that to catch a hacker, you need a hacker. And they’ve been watching Michael. They want him on their team. But the risk is enormous. If he accepts their challenge, Michael will need to go off the VirtNet grid. There are back alleys and corners in the system human eyes have never seen and predators he can’t even fathom--and there’s the possibility that the line between game and reality will be blurred forever.Praise for The Eye of Minds, Book One in the Mortality Doctrine series“More realistic and addictive than any video game--The Eye of Minds sucked me in from the very first page. The Girl with the Dragon Tattoo meets The Matrix in a vividly rendered world of gamers, hackers, and cyber-terrorists. I can’t wait to read the next book in the series!”--Kami Garcia, #1 New York Times bestselling coauthor of Beautiful Creatures and author of Unbreakable
“A gripping page-turner, Dashner’s latest is sure to please.”--BookPage
“Full of action [and] a rather surprising twist that will leave you flipping pages.”--fanboynation.com
“An adrenaline rush.” --School Library Journal
“In typical Dashner style, this is quick and involving, with the main frustration being the wait time until the next book.” --Booklist
“High on concept, this is an intriguing read for the digital generation.” --Kirkus Reviews"Dashner once again creates a dystopian world in which nothing is what it seems."-VOYAA Junior Library Guild Selection
From the Hardcover edition.