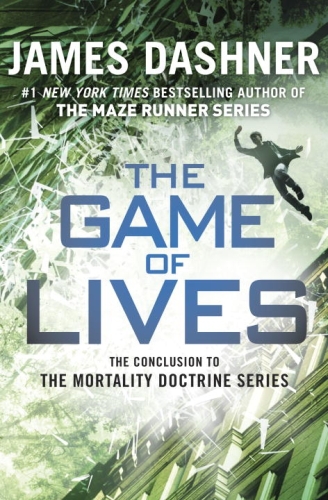 The Game of Lives (The Mortality Doctrine, Book Three)

From James Dashner, author of the #1 New York Times bestselling Maze Runner series, comes The Game of Lives, the final book in the Mortality Doctrine series, an edge-of-your-seat cyber-adventure trilogy that includes The Eye of Minds and The Rule of Thoughts.
Watch The Maze Runner movie and its sequel, Maze Runner:The Scorch Trials, from Twentieth Century Fox!
Michael used to live to game, but the games he was playing have become all too real. Only weeks ago, sinking into the Sleep was fun. The VirtNet combined the most cutting-edge technology and the most sophisticated gaming for a full mind-body experience. And it was Michael’s passion. But now every time Michael sinks, he risks his life.
The games are over. The VirtNet has become a world of deadly consequences, and Kaine grows stronger by the day. The Mortality Doctrine--Kaine’s master plan--has nearly been realized, and little by little the line separating the virtual from the real is blurring. If Kaine succeeds, it will mean worldwide cyber domination. And it looks like Michael and his friends are the only ones who can put the monster back in the box--if Michael can figure out who his friends really are.
Praise for the Mortality Doctrine Series:
“An exhilarating adventure story with touches of Anthony Horowitz’s Alex Rider books and Orson Scott Card’s Ender’s Game.”--Booklist
"A breathless, action-packed read that will have readers on the edges of their seats...Dashner has stuck the landing."--Kirkus Reviews
“An adrenaline rush.”--School Library Journal
“A gripping page-turner, Dashner’s latest is sure to please.”--BookPage
“Full of action [and] a rather surprising twist that will leave you flipping pages.” --FanBoyNation.com
From the Hardcover edition.