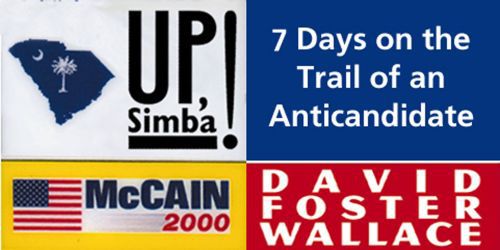 In February 2000, "Rolling Stone" magazine sent David Foster Wallace, "NOT A POLITICAL JOURNALIST, " on the road for a week with Senator John McCain's campaign to win the Republican nomination for the Presidency. They wanted to know why McCain appealed so much to so many Americans, and particularly why he appealed to the "Young Voters" of America who generally show nothing but apathy.
The "Director's Cut" (three times longer than the RS article) is an incisive, funny, thoughtful piece about life on "Bullshit One" -- the nickname for the press bus that followed McCain's Straight Talk Express.
This piece becomes ever more relevant, as we discuss what we know, don't know, and don't want to know about the way our political campaigns work.