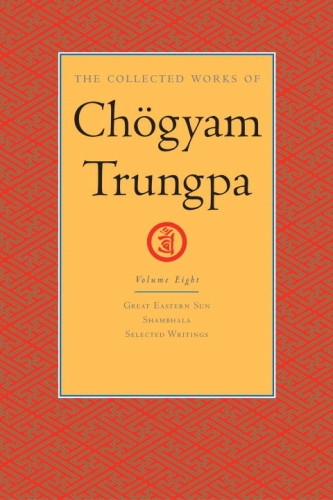 The Collected Works of Chögyam Trungpa brings together in eight volumes the writings of one of the first and most influential and inspirational Tibetan teachers to present Buddhism in the West. Organized by theme, the collection includes full-length books as well as articles, seminar transcripts, poems, plays, and interviews, many of which have never before been available in book form. From memoirs of his escape from Chinese-occupied Tibet to insightful discussions of psychology, mind, and meditation; from original verse and calligraphy to the esoteric lore of tantric Buddhism--the impressive range of Trungpa's vision, talents, and teachings is showcased in this landmark series.
Volume Eight covers matters of culture, state, and society. The two complete books reprinted here--Shambhala: The Sacred Path of the Warrior and Great Eastern Sun: The Wisdom of Shambhala--explore the vision of an ancient legendary kingdom in Central Asia that is viewed as a model for enlightened society and as the ground of wakefulness and sanity that exists as a potential within every human being. The selected writings include discussions of political consciousness, the martial arts, and the true meaning of warriorship. Two previously unpublished articles are "The Martial Arts and the Art of War," on the place of warriorship in the Buddhist teachings, and "The Seven Treasures of the Universal Monarch," a little gem describing the world of the Shambhala monarch.