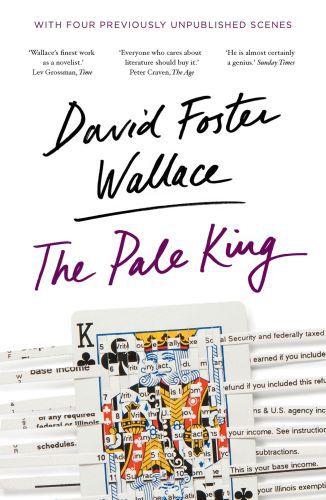 David Foster Wallace's last and most ambitious undertaking The agents at the IRS Regional Examination Center in Peoria, Illinois, appear ordinary to newly arrived trainee David Foster Wallace. But as he immerses himself in a routine so tedious and repetitive that new employees receive boredom-survival Wallace learns of the extraordinary variety of personalities drawn to this strange calling. And he has arrived at a moment when forces within the IRS are plotting to eliminate what little humanity and dignity the work still has.

Imagined with the interior force and generosity that were David Foster Wallace's unique gifts, The Pale King grapples directly with ultimate questions - life's meaning, the value of work, the importance of connection - and commands infinite respect for one of the most daring writers of our time.

'Overflows with Wallace's humour, compassion and, above all, his rolling, powerful, crashingly beautiful prose.' Sunday Times 'Anyone who has read Wallace will know the thrilling, intimate experience of following one of his giant held breaths of attention and feeling it fill your mind with thoughts that feel like your own.' Sunday Age 'One of the saddest and most lovely books I've ever read . . . D.F.W. writes sentences and sometimes whole pages that make you feel like you can't breathe . . . Let's state this clearly: You should read The Pale King.' Esquire 'I started to think in Wallace-style sentences, and started to think that Wallace-style senteces are in fact the only sensible way of describing the world.' Sunday Times