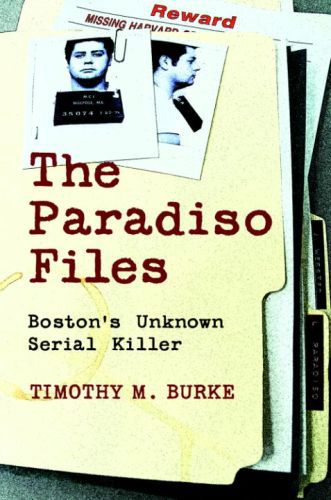 In this bold and suspenseful true-crime story, former homicide prosecutor Timothy M. Burke makes his case against one Leonard Paradiso. Lenny "The Quahog" was convicted of assaulting one young woman and paroled after three years, but Burke believes that he was guilty of much more - that Paradiso was a serial killer who operated in the Boston area, and maybe farther afield, for nearly fifteen years, assaulting countless young women and responsible for the deaths of as many as seven. Burke takes the reader inside the minds of prosecutors, police investigators, and one very dangerous man who thought he had figured out how to rape and murder and get away with it.
The Paradiso Files generated headlines when first published in February 2008. Nine days later, Paradiso died at the age of sixty-five without commenting on any of Burke's accusations, including that he murdered Joan Webster, a Harvard graduate student who disappeared from Logan Airport in 1981. Boston-area prosecutors announced in September 2008 that Burke's revelations had led them to reopen the unsolved murder cases of three young women - Melodie Stankiewicz, Holly Davidson, and Kathy Williams. There were "too many similarities between the individual cases to ignore," a prosecutor involved in the new investigation said. Burke's account leaves little doubt that Paradiso's deeds should go down in infamy, alongside those of the Boston Strangler.