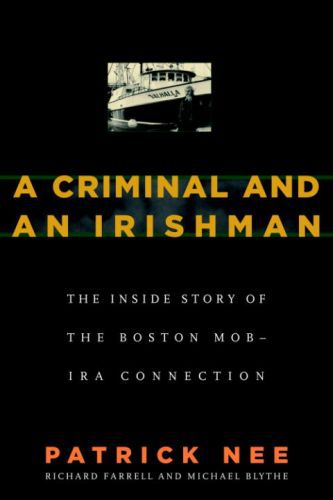 A Criminal and an Irishman

Former rival and associate of James "Whitey" Bulger tells all. After returning from Vietnam where he served as a combat Marine, Pat Nee fought a gang war against Whitey Bulger. When members of Nee's Mullen gang killed the leader of Bulger's Killeen faction, Nee arranged for the dispute to be mediated by Howie Winter and Patriarca crime family captain Joseph Russo. The two gangs joined forces, with Winter as overall boss. When Winter was convicted of fixing horse races in 1979, Bulger became leader, and Nee responded by concentrating his energy on raising money and smuggling guns to the Provisional IRA. Disgusted by Bulger's brutality, and increasingly focused on the Irish cause, Nee distanced himself from his former ally. Ultimately it was revealed that, for years, Bulger had served as an FBI informant.
A Criminal and an Irishman is the story of Pat Nee’s life as an Irish immigrant and Southie son, a Marine, a convicted IRA gun smuggler, and a former violent rival and then associate of James "Whitey" Bulger. His narrative transports the reader into the criminal underworld, inside planning and preparation for an armored car heist, inside gang wars and revenge killings. Nee details his evolution from tough street kid to armed robber to dangerous potential killer, and discloses for the first time how he used his underworld connections and know-how as a secret, Boston-based operative for the Irish Republican Army. For years Pat smuggled weapons and money from the United States to Ireland – in the bottoms of coffins, behind false panels of vans – leading up to a transatlantic shipment of seven and a half tons of munitions aboard the fishing trawler Valhalla. No other Southie underworld figure can match Pat’s reputation for resolve and authenticity.
From the Trade Paperback edition.