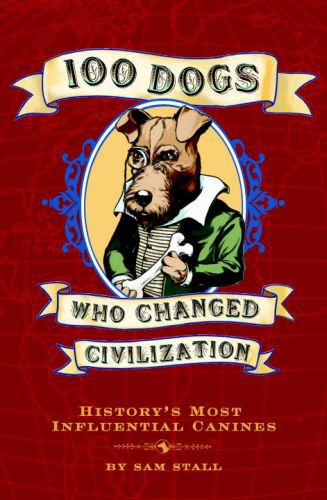 100 Dogs Who Made a Difference
If you don’t believe that one dog has the power to alter civilization, then you’ve obviously never heard of Peritas (p. 166), the dog who saved Alexander the Great from being trampled by an elephant. Or Biche (p. 57), the Italian Greyhound who started a war between France and Russia. Or Urian (p. 74), the dog who bit Pope Clement VII and finalized England’s break with the Catholic church. Or Peps and Fips (p. 96), the dogs who helped Richard Wagner compose his operas.
These are just five of the 100 Dogs Who Changed Civilization, and this book honors their extraordinary contributions to science, history, art, government, religion, and more. You’ll meet a dog who ran for president of France (p. 79) and a dog who saved a movie studio (p. 115). You’ll meet dogs who have inspired great works of literature (p. 92) and who were awarded medals for their wartime service (p. 158). You’ll even meet a dog who became a real-estate mogul (p. 141). These beautifully illustrated true stories are a tribute to the intelligence, bravery, and loving nature of dogs all over the world.
From the Hardcover edition.