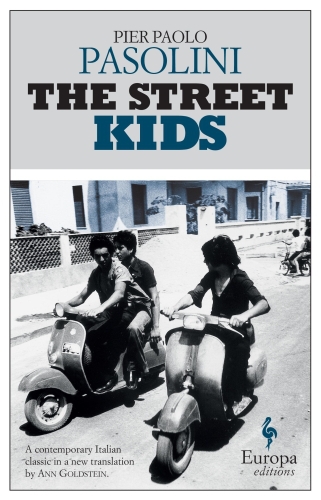 The Street Kids is the most important novel by Italy's preeminent late-20th Century author and intellectual, Pier Paolo Pasolini. A powerful, groundbreaking contemporary classic, The Street Kids is now available in a new translation by Ann Goldstein, translator of Elena Ferrante's Neapolitan Novels.
Pasolini's The Street Kids was heavily censored, criticized by professional critics, and lambasted by much of the general public upon its publication. But like many innovative works of art its undeniable force eventually led to it being universally acknowledged as a masterpiece. It is a moving tribute to an entire class of people in danger of being forgotten by art, by institutions, and by society at large.
The Street Kids tells the story of Riccetto, a poor urchin who lives on the outskirts of Rome. Readers meet him at his first communion in 1944 during the German occupation of Italy. In the years that follow, drifting ever further from family and friends, Riccetto moves from petty theft to more elaborate cons and finally to prostitution. He is arrested and jailed after trying to steal some iron in order to buy his fiancée an engagement ring.
Pasolini's message of rebellion and transgression is as important today as it was in the 1960s and 1970s.
From the Trade Paperback edition.