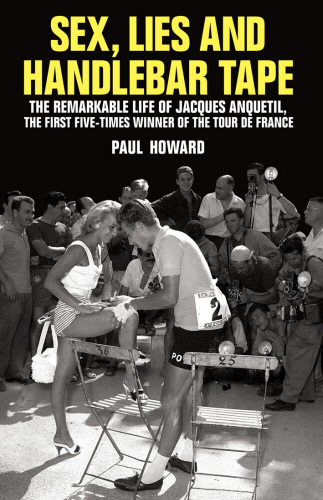 Sex, Lies and Handlebar Tape is the astonishing biography of French cycling star Jacques Anquetil. For the first time since his death in 1987, it reveals the extraordinary truth behind the legend, the man and the cyclist.His list of 'firsts' alone makes him worthy of a place in the cycling pantheon: the first man to win the Tour de France five times; the first man to win all three grand tours - the Tour de France, Giro d'Italia and Vuelta a Espaïa; and the first man to win both the Tour and Vuelta in the same year.However, the extraordinary life of Anquetil does not stop at his achievements on a bike. He candidly admitted to using drugs, offended legions of fans by confessing that his only motivation for riding was financial and infamously indulged his enthusiasm for the high life. He also seduced and married his doctor's wife, had a child with her daughter and then sustained a ménage à trois with both wife and stepdaughter under the same roof for 12 years. When this 'family' eventually imploded, he attempted to inspire jealousy in his former lovers by having a child with his stepson's ex-wife.Containing exclusive contributions from Anquetil's family, friends, teammates and rivals, Sex, Lies and Handlebar Tape untangles myth from reality and confirms that fact is definitely stranger than fiction.