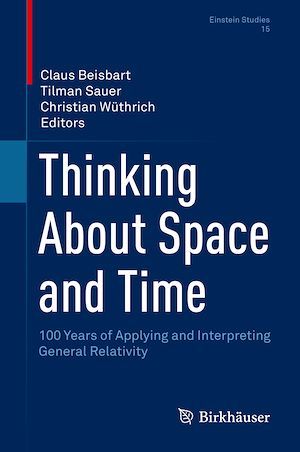 Thinking About Space and Time

This volume offers an integrated understanding of how the theory of general relativity gained momentum after Einstein had formulated it in 1915. Chapters focus on the early reception of the theory in physics and philosophy and on the systematic questions that emerged shortly after Einstein's momentous discovery. They are written by physicists, historians of science, and philosophers, and were originally presented at the conference titled Thinking About Space and Time: 100 Years of Applying and Interpreting General Relativity, held at the University of Bern from September 12-14, 2017. By establishing the historical context first, and then moving into more philosophical chapters, this volume will provide readers with a more complete understanding of early applications of general relativity (e.g., to cosmology) and of related philosophical issues. Because the chapters are often cross-disciplinary, they cover a wide variety of topics related to the general theory of relativity. These include:Heuristics used in the discovery of general relativityMach's PrincipleThe structure of Einstein's theoryCosmology and the Einstein worldStability of cosmological modelsThe metaphysical nature of spacetimeThe relationship between spacetime and dynamicsThe Geodesic PrincipleSymmetriesThinking About Space and Time will be a valuable resource for historians of science and philosophers who seek a deeper knowledge of the (early and later) uses of general relativity, as well as for physicists and mathematicians interested in exploring the wider historical and philosophical context of Einstein's theory.